Data transfer performance can be a very important issue in time-pressing environments such as scenarios of on-set data wrangling.

please refer to the document “Factors for data-transfer performance”.

How to analyze your setup for bottle necks

Every system is only as fast as the slowest component. So for example attaching a brand new, ultra-fast SSD to a computer via USB2 is no improvement in performance over a 5 year old HDD – the USB2 interface is the limiting factor. The following list helps you to find the bottleneck and to tune your setup for higher performance. Sometimes just using different connections (lots of devices have multiple, different connection ports) or replacing one component already can heavily improve the performance of an entire data-transfer system.

When for example copying data from e.g. a SxS card to an external RAID and a USB3 drive with Silverstack, a lot of components are involved – and the slowest one is slowing down the overall performance and thus all the other components.

In this example we can identify three data storage devices that are each consist of several components:

1. Measure the maximum performance of each device

You can determine the speed of a device by measuring the read and write speed to that device individually and independently. On the Mac you can either use tools like Blackmagic Disk Speed Test or use command line tools such as “dd”.

Please note that the operating system caches disk access in RAM. So if you write a small file to disk it is still in the cache and a directly following read test will retrieve that file directly from RAM, so that the disk is not used at all in your test! So make sure that your test files are large enough (e.g. larger than RAM). As a good measure you can always use “Activity Monitor” that comes with OSX to monitor drive usage and performance (use the “Disk Activity” tab). For example when accidentally retrieving data from cache during a test you will detect that as zero activity on the drives in Activity Monitor.

Comparing the performance values of the different devices, you now know the slowest device. This device will slow down the entire data transfer, so maybe you can improve that first.

2. Observe the overall performance during the copy process

Now find out if the expected performance can be observed during a real life test. Start a copy process to multiple destinations in Silverstack and use Activity Monitor as your instrument for measuring performance.

If the speed of your slowest device (and thus the observed reference copy performance) is much slower than the speed of the other devices it might be worth improving that.

You can now relate these values to your measured values for the entire device. If you experience completely odd values, maybe something is configured wrong (attaching a USB3 drive to a USB2-only port) or a component is faulty.

The read buffer size settings use «2MB, recommended» as default. However, increasing the read buffer size might help when copying to software raids on OS X. Decreasing below the 2MB recommended value is usually not advised. The 2MB size recommendation is only illustrative. The optimal size depends on your specific setup and format combination. 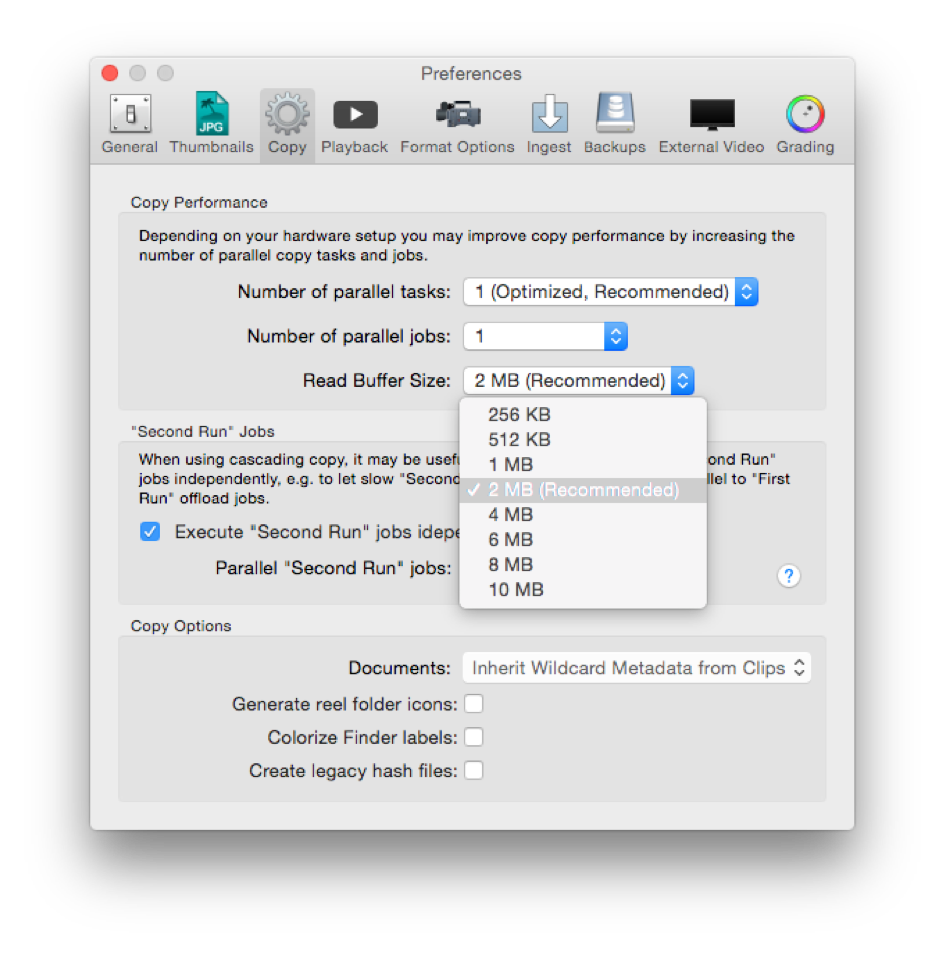