Silverstack XT and Lab have the capability of reproducing ACES workflows.

Silverstack implements this pipeline in the ACES (Academy Color Encoding System) grading modes. You can see the nodes and controls of the “ACES CDL” grading mode in the screenshot below. On every interaction with the color controls of the ACES grading mode (e.g. change of IDT, modify of ASC-CDL) all transforms are baked together automatically and are applied to the image.

You can add a “LMT” node in Silverstack (in the ACES CDL Advanced grading mode) that supports the official, predefined LMT transforms shipping with the respective ACES version as well as custom 3D LUTs.

Note: LMTs are specified by the ACES specification as a transform from and to ACES AP-0 (the linear ACES color space). When using 3D LUTs as a way to exchange “LMTs”, these 3D LUTs are usually intended to be applied in a typical grading working color space such as ACEScct (3D LUTs cannot properly represent transforms to be applied in linear color encoding as they would not be able to provide the necessary fidelity in all brightness levels). So in Silverstack, the “LMT” node is applied in the working color space (for instance ACEScct).

Silverstack supports multiple versions of ACES, ranging from 0.7.1, 1.0, to the latest ACES version 1.3. For compatibility with the post production workflow please choose the right ACES version, as the transforms can be slightly different in different versions, and newer version usually include more and more recent input (IDT) and output (ODT) transforms, including RRT+ODT transforms for HDR in ACES version 1.1 or higher.

Note: Transforms for ACES version 1.3 can be downloaded from Silverstack v8.2 or higher

In the Silverstack preferences you can manage the available ACES versions and transforms: 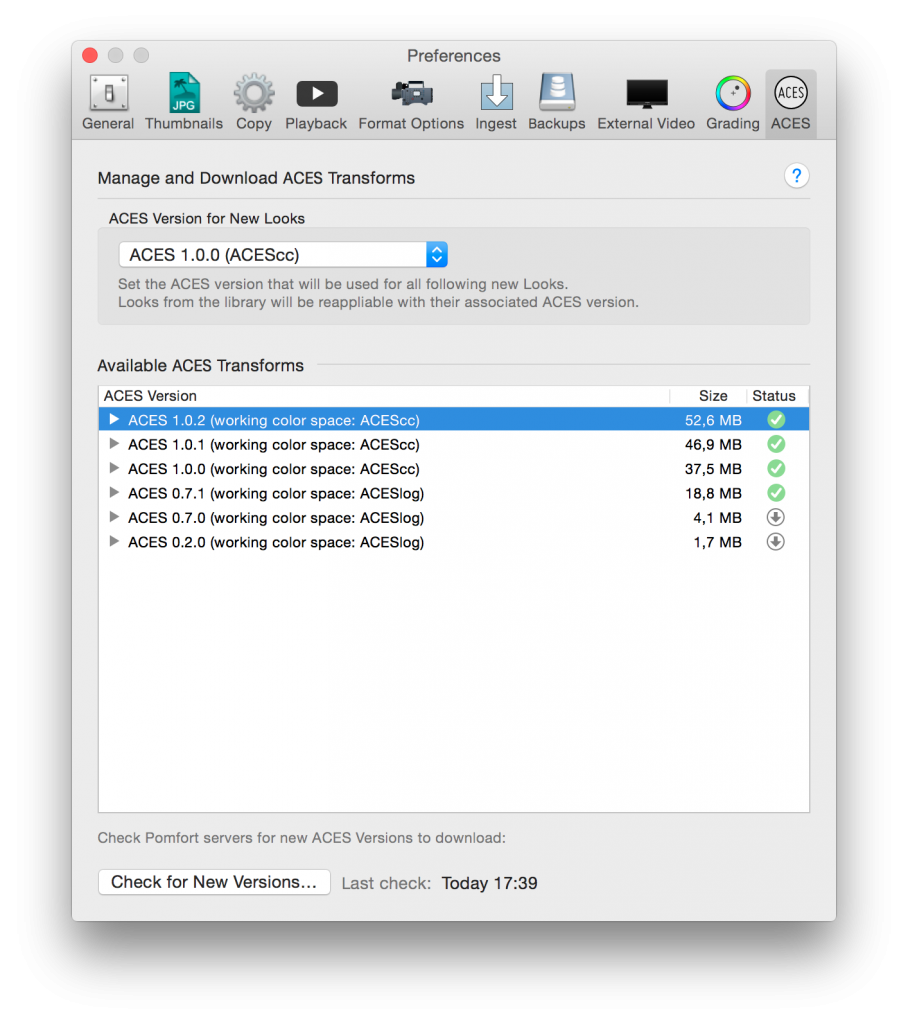 Click the button “Check for New Versions” at the bottom of the preferences window to see if new ACES versions are available to download from the Pomfort servers.

ACES grades can also be exported as 3D LUTs, including the CDL values, IDT and ODT.

Silverstack can export the current look of a clip using “File > Export > Looks from Clips…” to export looks from all selected clips or stored looks in the look library as AMF files (“ACES Metadata Files”, .amf). Currently the export of AMF is limited to the ACES CDL grading mode.

Silverstack offers all officially (in the Academy’s repository) available IDT and ODT transforms, as well as a few custom transforms by Pomfort. Please take a look at the available transforms in Silverstack’s preferences in the “ACES” tab.

See https://pomfort.com/workflow/aces/ for an overview of ACES related topics with Pomfort’s products.