With this feature set you can send looks (as ASC-CDL and LUT) to be applied on the outputs of the camera by using a network connection (LAN or WiFi depending on your setup).

Additionally, it’s possible to receive metadata and framegrabs from the current live image of the camera. This way you can include camera and lens metadata to your shots and include the graded framegrabs to the Look Reports.

Furthermore, you can use the camera’s image source as an image reference in the Image Viewer, allowing the fine tuning of the looks later – even if the camera is not available.

Note: The in-camera grading integration requires working in the ARRI CAP Compatible grading mode and does not support working within an ACES pipeline. However, you can use a basic setup with a LUT box or another real-time grading device for working in the ACES CDL or ACES CDL Advanced grading modes.

Adding the ARRI Camera as a Device

In order to exchange look information with Livegrade, the camera needs to have a working network connection with the Mac where Livegrade is running on.

In order to connect Livegrade to the camera you have to enable the “Camera Access Protocol” in the ARRI camera’s network menu at “System -> Network”. You can also set a password there to protect access to the camera.

Make sure that you have set the monitor output to “Look File” in the camera’s Color menu, in order to have the look applied to your monitor out.

Once a correct connection is established, launch Livegrade and you can proceed to add the ARRI Camera as a device. In order to do that, you can choose “Slots” in the main menu and then “Add Device”. Alternatively, you can add the device through the Device Manager.

After that, a wizard window opens: 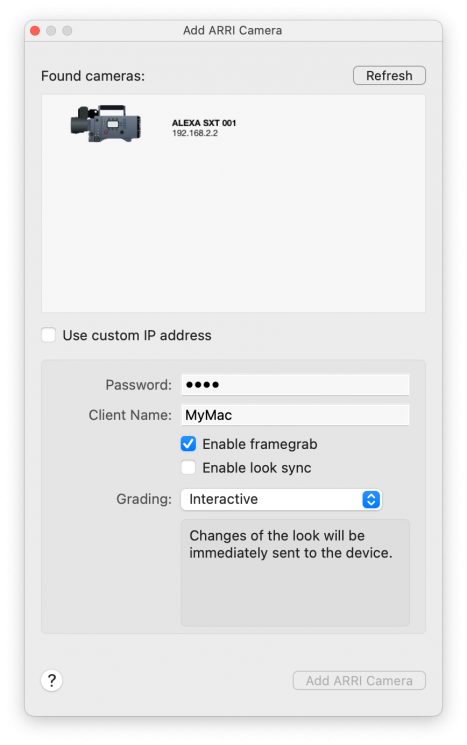 You can enable / disable, if you want to receive framegrabs from this camera by checking the “Enable Framegrab” checkbox.

Under “Grading” you can choose between different ways to add the camera as a device:

Working with the Camera in Livegrade

In the main window of Livegrade, the ARRI camera is now displayed in the corresponding grading slot as a device.

Once you alter the initial look loaded from the camera the Alexa will show a * next to the look name to indicate that it is changed.

When creating new looks in Livegrade you can choose if they should be stored to the camera as well.

While the current active look settings will be added as metadata to the recorded clips, you have to store the look to the camera in order to change the look name displayed on the camera and written to the metadata.

Getting the Camera’s Image in Livegrade

If framegrabs are enabled the camera image will be shown as an image source of the slot.

You can open the Image Viewer to display the current image by double clicking on the framegrab thumbnail in the Image Sources section. 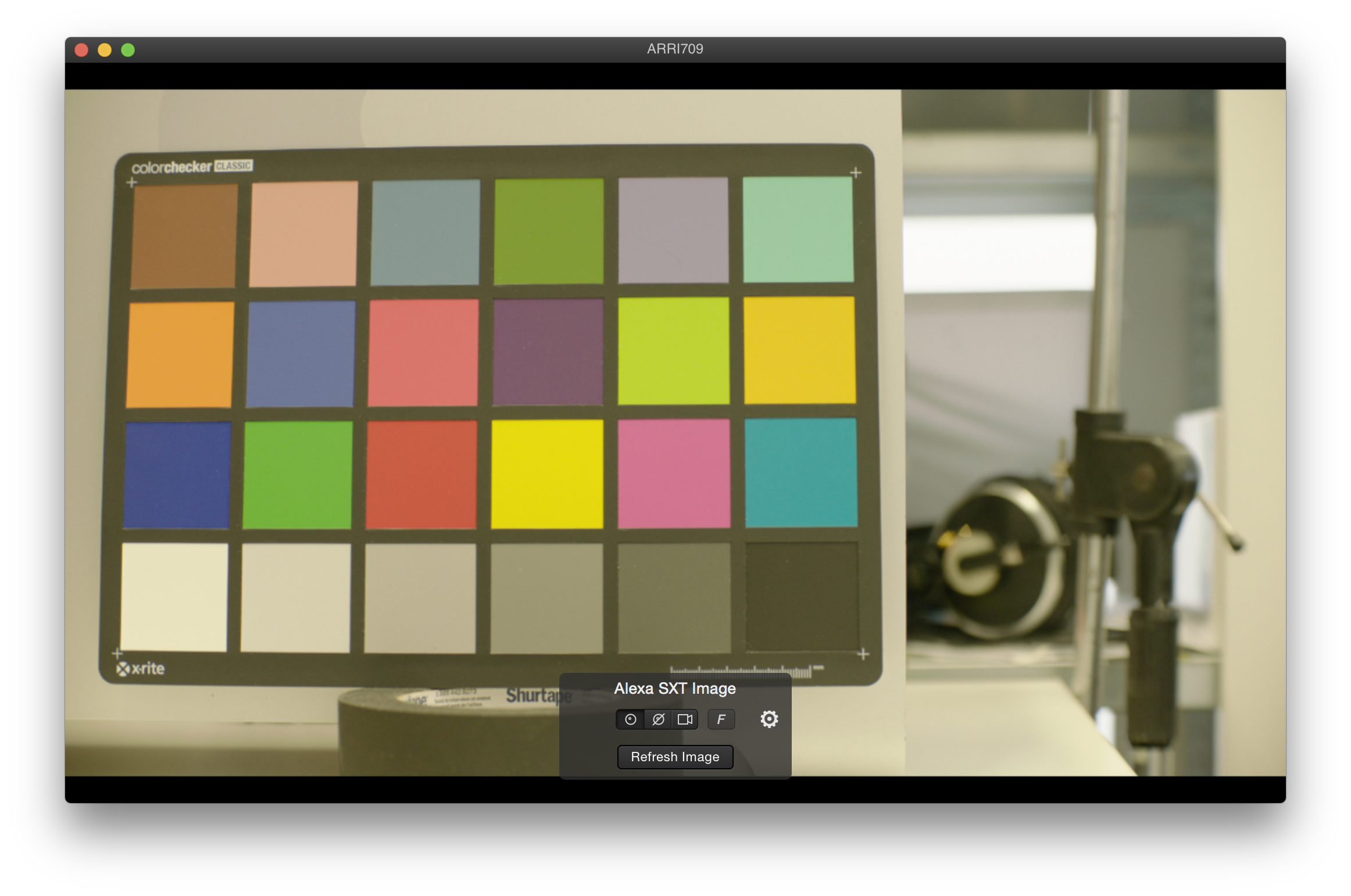 In case that you want to display an updated live image, you can perform a framegrab in Livegrade by clicking on the «Refresh Image» button. After that you will have the latest frame of the live image.

You can generally check if the ARRI camera is properly connected by going to the Device Manager. A green indicator shows a positive connection status.

Please be aware that due to the frame size (especially of the ARRI Alexa 65), taking framegrabs can take longer than maybe expected. Please grant the camera and application some time to process the framegrab.

For more information, also visit ARRI’s workflow page. In the downloads section, you will, for example, find the “ALEXA 35 – How to set up Pomfort Livegrade” workflow guideline with step-by-step instructions on how to set up ARRI’s ALEXA 35 camera with Livegrade.