Shots are stored in bins, and bins can be grouped in folders. You can organize folders within folders to create a project hierarchy. Selection of bins and folders behaves recursively: Selecting a folder shows the shots of all the bins and folders in the selected folder.

The shot library with bin and folder outline

Each “shot” (e.g. each entry in the shot library) consists of

All shot information is collected at the moment of creation, but can be either edited or updated at a later time if needed.

Media assets can be frame grabs or movie recordings generated within Livegrade while creating the associated shot, or imported images, imported still images from a movie or imported movie files.

The primary actions for lists of shots are:

The primary actions for single shots are:

There is an advanced “Smart Groups” view accessible from the shot library window, that displays a hierarchical structured outline of the currently selected folder level of the shot library. Smart groups are auto-generated based on shot metadata. You can define the hierarchy levels for the outline in a gear menu, that provides the metadata fields “Season”, “Episode”, “Crew Unit”, “Shooting Day”, “Scene”, “Shot”, “Take”, “Camera”, “Caption”, “Location” and “Rating” to choose from. You can also apply from predefined layouts or save custom layouts. 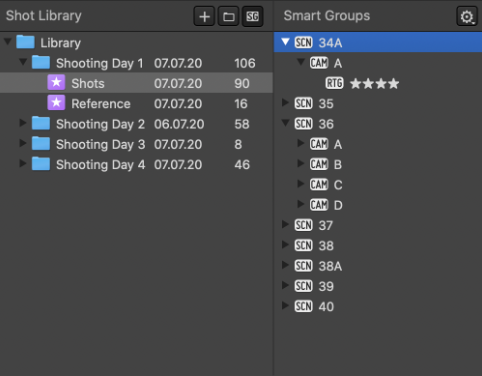 The path in the “Shots” sub-toolbar shows the current library folder and smart groups level and lets you browse and choose within the library.

The right panel besides the shot library has three tabs: One for the shot details, one for look presets, and one for the history.

The Shot Info shows detailed information about the currently selected shot and a preview image. You can resize the preview image by resizing the right panel. 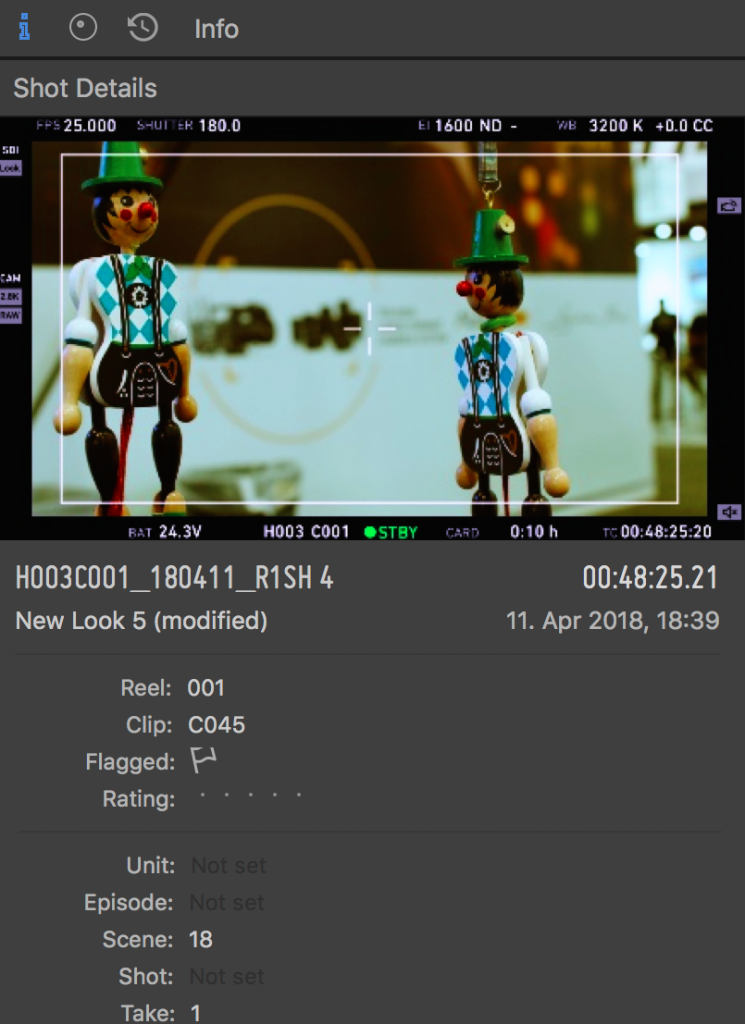 When building a new look it can be beneficial to import a reference image or reference movie in order to compare color, lightning and exposure with the current grade:

Note: The original movie file will be copied into Livegrade’s recordings folder. Depending on the file size this might take a while. Movies will show up in the shot library as soon as the copy process is done.