Node presets can be used to store and apply single aspects of a look. Examples of node presets could be: 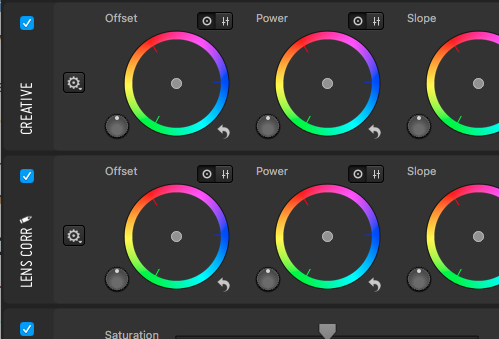 Each node of a look has a name. A little pen icon appears when hovering with the mouse over a node’s right bar. This indicates that the node can be named. You can edit the default names by clicking on the right bar of a node, where the name is displayed. A small panel is shown with a text field where you can edit the node name.

Please note that nodes need to have unique names within a look. No two nodes of a look can have the same name.

The names of looks are stored in look presets and node presets, and are later used to match nodes when applying a node preset to a look.

A node preset is created from the look in the current slot. Edit the names of the nodes that should be used in the node preset to meaningful names. Set all color controls of these nodes according to your needs.

Switch to the Look Library in the right bar. You can then save a node preset by clicking the “Add node preset” button above the Look Presets.

A panel is displayed where you can choose, which node should be stored in the node preset. The list shows all nodes of the current grades together with their names and type. Check the checkbox on the left of each row if you want that node to be part of the node preset.

Clicking “Save” saves a new node preset into the look library.

In the node library node presets are indicated by a little icon in the top-left corner. You can click on the little “i” in the bottom left of a node preset to display information about the nodes of the node presets.

Let’s illustrate the use of look presets with an example.

You have a look consisting of a creative CDL node, a second CDL node correcting the color cast of a lens, and a 3D LUT node with the log-to-video conversion.

Let’s assume you have to switch between three lenses regularly, that all have different color casts. You want to save a node preset for each lens, that only consists of the CDL node representing the correction of the lens’s color cast.

You now should have three new node presets containing only the lens correction for your three lenses.

When lenses are switched next time, you can simply apply the node presets for the corresponding lens in the look library. The node with the name “Lens Correction” will be updated with the correction for that particular lens.