Livegrade implements the ACES color pipeline including IDT transforms, working color spaces such as ACEScct and ACEScc, LMT, RRT and ODT transforms to be used on camera live signals and still images (e.g. for reference) on the film set.

The following diagram shows an example ACES pipeline as implemented in Livegrade.

Step-by-Step: How to Configure Livegrade to Start Using ACES

Livegrade implements this pipeline in the ACES (Academy Color Encoding System) grading modes. You can see the nodes and controls of the “ACES CDL” grading mode in the screenshot below. On every interaction with the color controls of the ACES grading mode (e.g. change of IDT, modify of ASC-CDL) all transforms are baked together automatically and sent to an attached LUT box.

You can take a look at how to use the advanced modes in the article Grading Modes in Livegrade.

For more information about how to export LUTs: Exporting Grades

You can add a “LMT” node in Livegrade (in the ACES CDL Advanced grading mode) that supports the official, predefined LMT transforms shipping with the respective ACES version as well as custom 3D LUTs.

Note: LMTs are specified by the ACES specification as a transform from and to ACES AP-0 (the linear ACES color space). Consequently, loaded LUTs in the LMT node will always be applied  in ACES AP-0. For this reason the LMT node only accepts LUTs in the Common LUT Format (CLF) matching the ACES specification. If you need to load a 3D LUT (e.g., in a typical grading working color space such as ACEScct), you can add a 3D LUT node and load any compatible 3D LUT format without limitation. LUTs in the 3D LUT node will be applied in the working colorspace (ACEScct/ACEScc).

Livegrade supports multiple versions of ACES, ranging from 0.7.1, 1.0, to the latest ACES version 1.3. For compatibility with the post production workflow please choose the right ACES version, as the transforms can be slightly different in different versions, and newer version usually include more and more recent input (IDT) and output (ODT) transforms, including RRT+ODT transforms for HDR in ACES version 1.1 or higher.

In the Livegrade preferences you can manage and download the available ACES versions and transforms: 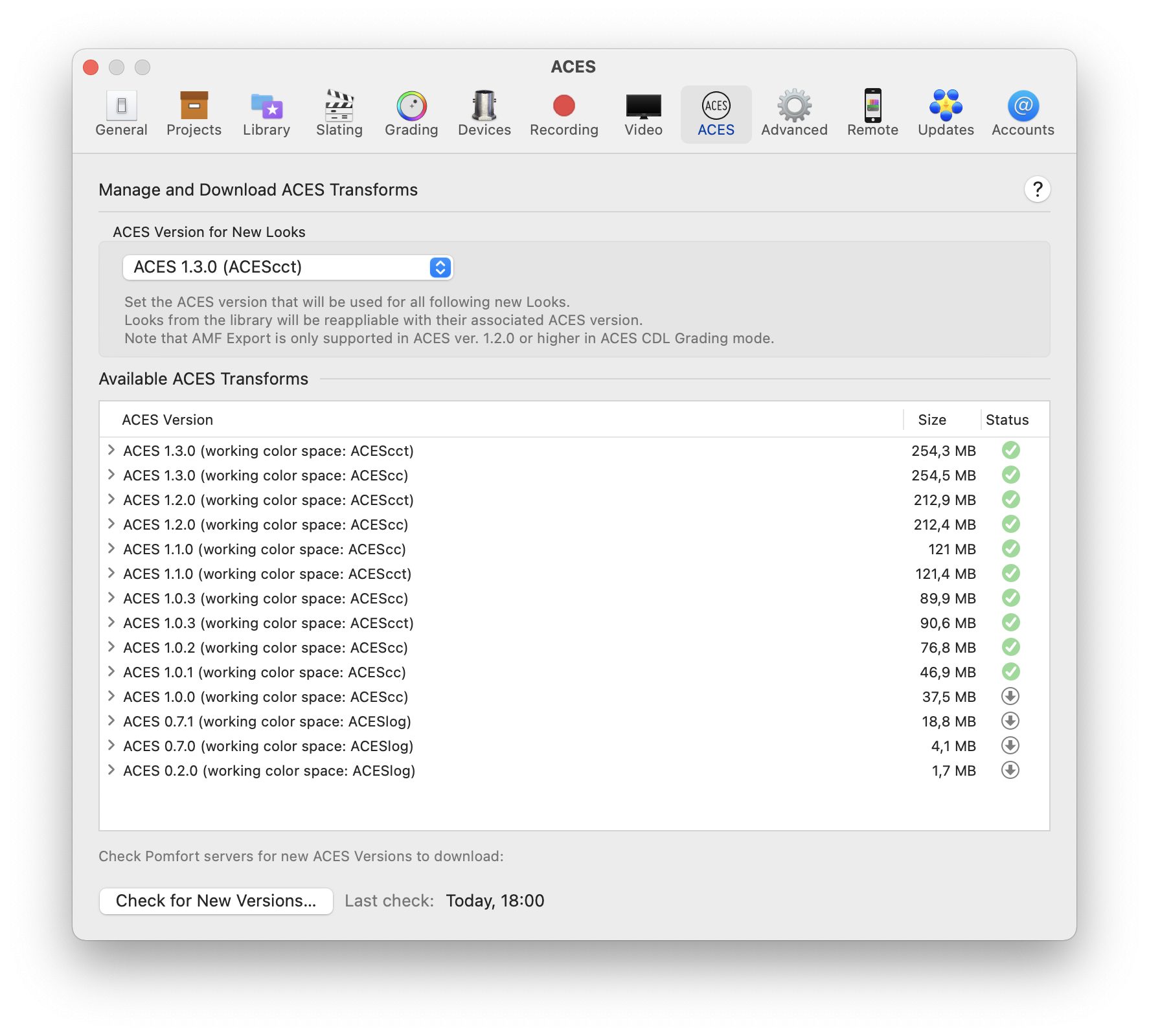 Click the button “Check for New Versions” at the bottom of the preferences window to see if new ACES versions are available to download from the Pomfort servers.

Livegrade can export the current look of a slot or stored looks in the shot library as AMF files (ACES version 1.2 or higher). Currently, the export of AMF is limited to the ACES CDL grading mode. See Exporting Shot Information for more details on exporting shot and look metadata from Livegrade.

With Livegrade the ACES grading mode can be used in different setups, e.g. with LUT-Boxes such as the Teradek COLR, FSI BoxIO or TV Logic’s IS-Mini or directly with a monitor such as the Flanders Scientific DM250 broadcast monitor, that has processing capabilities included.

To learn more about the hardware setup of Livegrade see the article about HD-SDI setup for Livegrade.

Please note that for ACES color pipelines a LUT device with a LUT size of 23 or 33 (or higher) is recommended. Otherwise the device might introduce interpolation problems such as bending or wrong levels in some areas of the visible color space.

Livegrade offers all officially (in the Academy’s repository) available IDT and ODT transforms, as well as a few custom transforms by Pomfort. Please take a look at the available transforms in Livegrade’s preferences in the “ACES” tab.

See https://pomfort.com/workflow/aces/ for an overview of ACES related topics with Pomfort’s products.